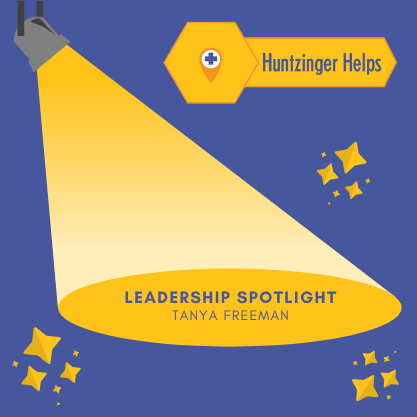 When the State of Arizona opened vaccination sites, Tanya Freeman, Huntzinger’s President, COO and Founding Partner, stepped in to lend a helping hand.

When the State of Arizona opened vaccination sites, willing and qualified hands were needed to assist with vaccinating as many people as possible. That’s where Tanya Freeman, Huntzinger’s President, COO and Founding Partner, stepped in. Tanya learned about the opportunity through the Arizona Department of Health website, and if you passed the lengthy application and background screening process, you were able to volunteer.

Arriving before 7am and working 10-hour shifts, Tanya and the other volunteers spend the first half hour of their shifts learning the systems, protocol and tools.

“It was interesting. It gets quite hot in Arizona, and the iPads we were using were overheating. It was important to become educated quickly on how to find patient information. For those people that were preregistering online and coming for the first time, it was challenging and more like finding a needle in a haystack,” said Freeman.

Over the course of a month, Tanya volunteered twice. During her first day, she was responsible for scheduling second vaccine appointments as well as observing any after-effects from the first dose. For her second shift, Freeman assisted the medical professional who was administering the vaccine by recording the vaccine dose, type, lot number, and where and when it was administered.

Nancy Ripari, Executive Vice President and Partner with Huntzinger, also volunteered and worked registration during both of her shifts. Whether it was through their collegiate attire (Go MSU Spartans!) or casual conversation, both women became friends with their fellow volunteers.

To avoid waste, volunteers were able to receive any vaccines that were left over. Tanya was one of the fortunate – and very thankful – volunteers who received their vaccine this way; however, the need for volunteers continues as distribution to rural areas remains a challenge Arizona faces.

“I would love to volunteer again. The best part – 98% of the patients were ecstatic. Lots of happiness and smiles. The grandparents who broke down and started crying because they can finally see their grandchildren again. That is the stuff that made it so rewarding,” said Tanya.

To learn how you can volunteer in your state, click here.